Polish physicist and chemist (French naturalized). She has received two Nobel prizes, in physics and chemistry.

Marie Curie, born Maria Skodowska, was born in 1867 in Poland. Since higher education was forbidden to women in her native country, she arrived in Paris in 1891 to study physics and mathematics at the Sorbonne. After several years of research, she discovered in 1898 with Pierre Curie and Henri Becquerel two radioactive elements, polonium (named in honor of Poland) and radium.

She defended her thesis “Research on radioactive substances” and received, with her husband, in 1903, the Nobel Prize in Physics for the discovery of natural radioactivity. In 1906, replacing Pierre Curie who died, Marie Curie became the first woman professor at the University of Paris (at the Sorbonne). In 1908, she was appointed full professor.

In 1911, she won the Nobel Prize in Chemistry for her work on polonium and radium. She was the first person to win two Nobel Prizes for her scientific work and the only woman, still today, to have received two Nobel Prizes. When the First World War broke out, Marie Curie showed her dedication and conviction. At the cost of countless efforts, she organized an automobile radiology service: the “little Curies”, as these cars were called, carried out more than one million X-rays during the last two years of the war.

After the war, Marie Curie was particularly active in the education of women. In 1930, she was involved in the creation of a high school for girls in Sceaux: the Lycée Marie Curie. Unfortunately, the long hours of exposure to radioactive substances led to the deterioration of her health and she died in 1934 in France. 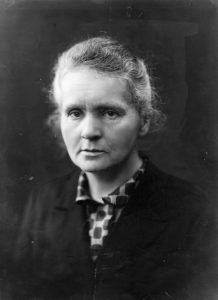