Mary Anning was an English fossil researcher. She discovered many fossils, which allowed scientists to discover new species, such as dimorphodon or plesiosaurus.

Mary Anning was born in 1799 in Lyme Regis, England. Her father, Richard Anning, was a cabinetmaker who made a living by collecting and selling fossils found in the surrounding cliffs. Mary Anning went to school where she learned to read and write. Being from a poor background, her education was limited. To earn some money, her father took her and her brother on fossil-collecting expeditions to the Lyme Regis cliffs. The coastline is rich in ammonites and belemnites, which are thought to have medicinal properties. In 1910, Richard died, leaving his family in debt and destitute. Mary and her brother decided to dedicate themselves to collecting and selling fossils full-time. The following year, they unearthed first a skull and then the skeletal remains of an ichthyosaur. Sold to a local nobleman who then sold it to a London collector, the skeleton attracted considerable interest. Joseph Anning undertook an apprenticeship with an upholsterer while Mary continued her research. In 1823, she discovered the first Plesiosaurus (aquatic reptile) and then a pterosaur (flying reptile) in 1828. Reading the scientific literature, she could obtain while continuing her research on fossils, Mary Anning developed an important knowledge and science. She was able to identify a fossil immediately. In 1826, she saved enough money to buy a house with a window for her shop. Many geologists, paleontologists and collectors from Europe and America visited her shop. As a woman, and a working class one at that, Mary was not admitted to the Geological Society of London. Despite all her science and knowledge, her discoveries were systematically published by men who frequently forgot to mention her. Mary Anning died of breast cancer on 9 March 1847. 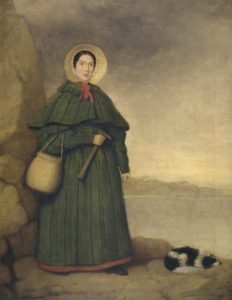 Pioneer fossil collector of Lyme Regis, Dorset. Oil painting by an unknown artist, before 1842. Golden Cap is visible in the background. Held at the Natural History Museum, London.