Born in Rome in 1901, he is considered, after Galileo Galilei, the greatest Italian physicist of all time.

One of the fathers of nuclear physics. His scientific commitment and personal events are dramatically intertwined with the events of the Second World War, leaving an intellectual legacy of great relevance, which still questions us about the complex relationship between science and society. After graduating, Fermi devoted himself to research in theoretical and experimental physics, gathering around him a team of young scientists who will soon focus on the investigation of the atomic nucleus. For the Italian scientist, however, the peak of his scientific career coincides with the decision to flee Italy, now marked by racial laws. He took advantage of the occasion of the trip to Stockholm, linked to the reception of the Nobel Prize, to then head to Copenhagen and set sail for New York. In the United States he continues his research dedicating himself to the study of fission, and building the first nuclear reactor: the Fermi pile. Here he joined the Manhattan Project, the research project that will lead to the construction of the first atomic bomb. It repudiated the war use of nuclear energy. In the following years, Fermi focused on the study of elementary particle physics. A commitment also remembered and celebrated through the Fermi Gamma-ray Space Telescope: a powerful gamma-ray space telescope launched in 2008 by NASA to explore cosmic phenomena at high energy. 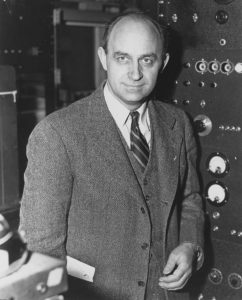