He discovered the Lactobacillus bulgaricus bacillus, which is the true cause for the existence of natural yogurt. In 1905, at the age of 27, Dr. Grigorov made the discovery, for which he is best known.

D-r Stamen Grigorov was born on 27.10.1878 and died on his birthday – 27.10.1945 in Studen Izvor village, Bulgaria. He graduated from high school in Sofia, and then studied natural sciences in Montpellier, France. He continued his education in Geneva, where he conducts his own research on yogurt at the University of Geneva under the guidance of Professor Leon Masol. He refused all proposals for future development abroad -to take over the chair of Prof. Masol in Geneva and to lead the Pasteur Institute in Sao Paulo in Brazil. For 20 years worked as a district doctor and manager of the hospital in Trun. He set up his own laboratory and tried to create a tuberculosis vaccine. In 1906, the French magazine La Press Medical published his article “Tuberculosis Vaccine” in which the discovery of the penicillin fungus was described. During the Balkan War and the First World War, he was a military doctor. Cholera broke out among the soldiers. Using his discovery about the penicillin fungus, he continued the fight against the cholera epidemic, risking his life. For his participation in the two wars and his merits to the state, Dr. Stamen Grigorov was awarded the Order of Bravery and the Red Cross Gold Medal. 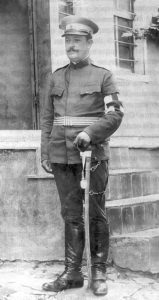