You have entered a time machine that takes you back in time to ancient Greece, but on your way, the time machine malfunctioned. Instead of taking you to the Ancient Agora of Athens you find yourselves locked in the ancient “desmoterion”, a Greek jailhouse filled with math puzzles and riddles placed by Pythagoras himself to solve.

You are in a time machine on your way to explore the Ancient Agora of Athens in Greece and meet Pythagoras in person but the machine’s algorithm suddenly malfunctions and you are turned upside down. Instead of arriving at the marketplace as planned, you open the time machine door and find yourselves in a locked prison cell inside a Greek jailhouse called the “desmoterion”. Inside the cell you see a pile of scrunched up notes filled with math equations and mysterious locked boxes. Having heard of your arrival, Pythagoras placed these methodically in the room with hopes that those who will arrive will be worthy of his time and a pleasure to meet. The key that opens the cell is revealed when all mathematical puzzles and riddles are solved. Follow Pythagoras notes, instructions and graphs to show you the way out, but make sure you do all this on time! Pythagoras is very impatient; he doesn’t like to wait…

Pythagoras was an ancient Greek philosopher and the founder of Pythagoreanism. He is credited with many mathematical and scientific discoveries such as the Pythagorean theorem, Pythagorean tuning, etc.

Pythagoras was born in 570 BC in Samos, Greece. Pythagoras is said to have travelled to Croton in 530BC and founded a school in which initiatives were sworn to secrecy and lived an ascetic, communal lifestyle. He is credited for many scientific and mathematical discoveries, including the Pythagorean theorem, Pythagorean tuning, the five regular solids, the Theory of Proportions, the sphericity of the Earth and the identity of the morning and evening stars like Venus. He is also said to have been the first to divide the globe into 5 climatic zones. In the field of music, Pythagoras discovered that musical notes could be translated into mathematical equations. He is also credited for having been the first to teach that the Earth was spherical. His philosophy influenced Plato and had a major impact on scientists like Nicolaus Copernicus, Johannes Kepler and Isaac Newton. 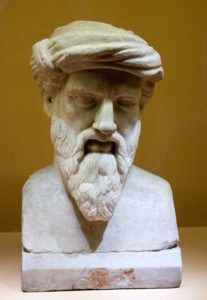