(born around 370-287 BCE) Greek scientist and philosopher who, thanks to his in-depth study of systematics, morphology, geography and plant physiology, made an epochal contribution to biology.

He studied at Athens under Aristotle, and when Aristotle was forced to retire in 323, he became the head of the Lyceum, the academy in Athens founded by Aristotle. Under Theophrastus the enrollment of pupils and auditors rose to its highest point.

Theophrastus was one of the few Peripatetics who fully embraced Aristotle’s philosophy all areas of metaphysics, physics, physiology, botany, ethics, zoology, politics, and history of culture. His general tendency was to strengthen the systematic unity of those subjects and to reduce the transcendental or Platonic element of Aristotelianism as a whole. Of his few surviving works, the most important are Peri phytōn historia (“Inquiry into Plants”) and Peri phytōn aitiōn (“Growth of Plants”), comprising nine and six books, respectively. Among Theophrastus’ other works is the Physikōn doxai (“Opinions of Natural Philosophers”).

In his ethical teachings (famous because of the assaults of the Stoic philosophers), Theophrastus reiterated Aristotle’s notion of a plurality of virtues with their relative vices and acknowledged a certain importance to external goods, which the Stoics held were mere luxuries for human life.

As reconstructed by Herman Diels in Doxographi Graeci (1879), it provides a foundation for the history of ancient philosophy. 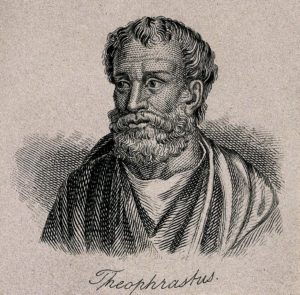