Rita Levi-Montalcini was an Italian Neurobiologist and Nobel Laureate. She co-discovered the nerve growth factor.

Rita Levi-Montalcini was born in 1909 in Italy. After seeing a close family friend die of stomach cancer, she decided to become a doctor at the University of Turin. During her university years, she became interested in the developing nervous system. She became an assistant to Giuseppe Levi at the university but shortly after she lost her position due to the 1938 laws that barred Jews from university positions. Due to this, she set up a lab in her bedroom and studied the growth of nerve fibers in chicken embryos. After the end of WW2, she was offered a fellowship at the Washington University of St. Louis which is where she managed to isolate the nerve growth factor in 1952. She managed to discover this from observations of certain cancerous tissues that cause extremely rapid growth of nerve cells. Using chick embryos, Montalcini established a mass of cells that was full of nerve fibers. This was her most important discovery and later granted her full professorship in 1958 and became the first woman to receive the Max Weinstein Award for her neurobiological research. 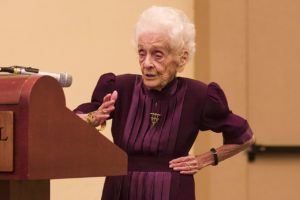