Lina Solomonovna Stern (or Shtern; Russian: Лина Соломоновна Штерн; 26 August 1878 – 7 March 1968) was a Soviet biochemist, physiologist and humanist whose medical discoveries saved thousands of lives at the fronts of World War II. She is best known for her pioneering work on the blood–brain barrier, which she described as haemato-encephalic barrier in 1921.

While working at the University of Geneva, Stern published a series of studies demonstrating the existence of the blood-brain barrier with colleague Raymond Gautier. Beginning in 1918, the two performed systematic experiments on the movement of various substances from the blood into the nervous system and estimated the extent to which these substances were able to permeate the brain. From these studies they were able to conclude that there exists a barrier between the blood and brain, which they termed in French “barrière hématoencéphalique”. In a 1934 paper, Stern also independently introduced the notions of barrier selectivity and barrier resistance, realizing that the blood–brain barrier both selectively allows certain substances to enter the brain and protects the internal milieu of the brain from that of the blood. Today these are acknowledged as two of the main functions of the blood–brain barrier. 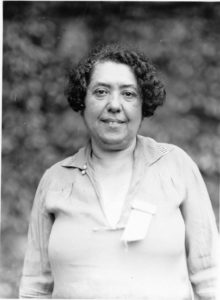