The Latvian scholar, who compiled and edited the first publication of Latvian folk-song texts "Latvju Dainas" (1894-1915).

Krisjanis was the eighth and last child in a poor family of Latvian servants in a German home. He acquired German, Russian very quickly; studied Latin and Greek. A Russian general helped him to get into a gymnasium. He enrolled in the department of physics and mathematics at University of Tartu, however he had to leave the studies due to poverty. He joined progressive national Young Latvians group and became a writer, all his life devoting to Latvia and Latvian language and culture. Krisjanis Barons completed one of the most responsible tasks, that no one else agreed to do-to collect Latvian Daainas. STEAM connections. How can all the Arts be counted and put into consequential order? Alphabetic, timeline, meaning, significance, random order? Philology doesn’t belong to STEM, but what if it is counted, ordered? Latvian culture cannot be imagined without Latvian Dainas-short quatrains, whose melodic range is limited to three or four tones and their length to four or eight measures where each beat corresponds to a syllable. The treasure of this Art had to be saved for future generations, that meant to be counted and put into a special cabinet in a special order, performed by a Latvian, Krisjanis Barons, who took the responsibility to do this lifelong work. 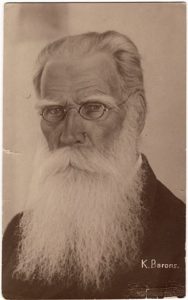