Italian Renaissance physicist and astronomer who invented the telescope. His creation enriched his observations and allowed him to confirm that the Earth does indeed revolve around the Sun.

Galileo Galilei was born in Pisa in 1564. At the age of 17, Galileo Galilei began studying medicine, which he soon abandoned. His drawing teacher managed to get her interested in mathematics – a term that encompassed several disciplines including astronomy and physics. In 1592, Galileo became a professor of mathematics in Padua and supplemented his income by making navigational instruments and compasses. As early as 1597, Galileo became interested in the fall of bodies and formulated the mathematical law describing this fall in 1602. The scientist’s life took a turn in 1609 when he learned of the existence of the telescope, an object that was then used more as a toy than as an observation instrument. Galileo made a copy and marketed it, perfecting the instrument: the telescope magnified up to 30 times. Turning it towards the sky, he discovered that the Milky Way was made up of many stars invisible to the naked eye and observed four bodies revolving around Jupiter, which he called “Medici planets”. He continued his observations and discovered sunspots, proving that the Sun had imperfections. He then became involved in scientific and religious disputes by asserting heliocentrism and the movement of the Earth. Galileo was forbidden by the Church to teach these ideas by any means. In 1632, the scientist published “Dialogue between the Two Greatest Systems in the World”, in which he presented a “proof” of the Earth’s motion and directly criticised the Church’s thinking. In 1633, Galileo appeared before the Tribunal of the Inquisition. Galileo agreed to recant and was placed under house arrest in Arcetri. In prison, he wrote his major work Discourses concerning two new sciences, which was published in Holland (1638). Galileo died in 1642. 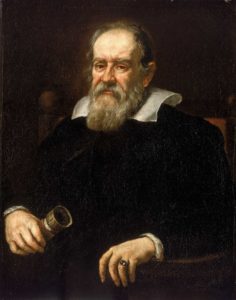