He is considered the founder of modern accounting, understood as a discipline that deals with the detection of business phenomena.

He was an Italian mathematics teacher, and also a religious and economist. He lived between 1400 and 1500. He traveled a lot, until in 1497 he accepted the invitation of Ludovico the Moor to work in Milan, where he worked with Leonardo da Vinci. In 1494 he published in Venice a real mathematical encyclopedia, entitled Summa de arithmetica, geometria, proportioni e proportionalità, written in the vernacular, as he himself declares (a mixture of Latin, Italian and Greek terms), containing a general treatise on arithmetic and algebra, elements of arithmetic used by merchants (with reference to the coins, weights and measures used in the various Italian states). One of the chapters of the Summa is entitled Tractatus de computis et scripturis; it presents in a more structured way the concept of double entry, already known and disclosed in the commercial environment, which then spread throughout Europe under the name of ” Venetian method “, because it was used by the merchants of Venice. Hence, he did not invent the double entry, but was its first popularizer through the use of the press.
In a manuscript of the fifteenth century unknown to the general public he describes numerous mathematical games, ancient and very topical games. 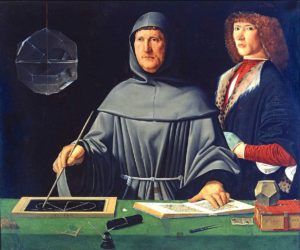