Born between 25 August and 31 October 1451, died 20 May 1506. Italian explorer and navigator who completed four voyages across the Atlantic Ocean, opening the way for the widespread European exploration and colonization of the Americas.

Christopher Columbus made four trips across the Atlantic Ocean from Spain: in 1492, 1493, 1498 and 1502. He was determined to find a direct water route west from Europe to Asia, but he never did. Instead, he stumbled upon the Americas. Though he did not really “discover” the New World—millions of people already lived there—his journeys marked the beginning of centuries of exploration and colonization of North and South America.

On August 31 1498 (third voyage), he returned to Hispaniola and found the colony of Santo Domingo there in shambles. After a government representative was sent to investigate the problems in 1500, Columbus was arrested and sent back to Spain. He arrived in October and was able to successfully defend himself against the charges of treating both the locals and the Spaniards poorly.

Christopher Columbus did not “discover” the Americas, nor was he even the first European to visit the “New World.” (Viking explorer Leif Erikson had sailed to Greenland and Newfoundland in the 11th century.)

However, his journey kicked off centuries of exploration and exploitation on the American continents. The Columbian Exchange transferred people, animals, food and disease across cultures. 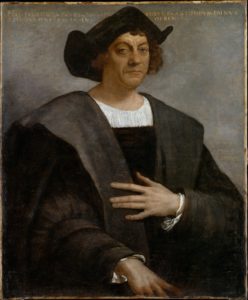