Encode a message using Cesar code. The Caesar code (or Caesar's cipher) is an encryption based on a shift of the alphabet (moving the letters further down the alphabet), it is a monoalphabetic substitution, i.e. the same letter is replaced by only one other (always identical for the same message). The most commonly used offset is 3 letters. Example: Code CLUE with an offset of 3. To code C, take the alphabet and look three letters further on: there is F. So C is coded F. CLUE is encrypted FOXH
Does it require an electronic device? No

In this example, we will use the free scape.enepe.fr website which is an online Caesar code decoding wheel., but it is possible to use other websites that offer the same manipulation. 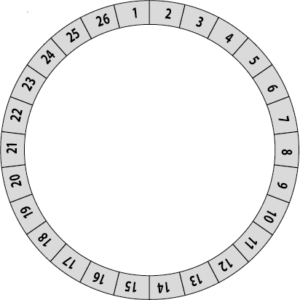