Vincent Willem van Gogh (1853 –1890) was born in Zundert of the Netherlands. At the age of sixteen he started working for the Hague gallery of the French art dealers Goupil et Cie.. Some years later he moved in to Paris and lost the interest to become an art dealer. From then he started searching for his interests. He changed many time his mind. He at first became an assistant teacher, then a clergyman and later as an evangelist he went at a coal-mining region. It is there where he decided to become an artist. Van Gogh is one of the most famous artists in the history of Western Art. He did not receive recognition as he was still alive. His paintings are characterised by vivid colours and passionate brushwork. He created about 2.000 artworks in a decade and during the last two years of his life, around 860 oil paintings. He committed suicide at his 37 years after long years of depression and poverty. 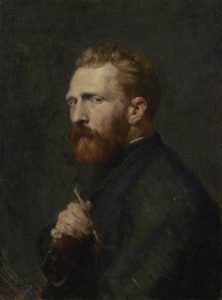