Unsung mother of the double helix

Rosalind Franklin has been attracting people’s attention for decades now. The Dark Lady of DNA spent most of her short life in dark labs, surrounded by men who did not accept her as a scientist, but instead used her scientific research for their own work, making their way to the Noble Prize. In May 1952, Franklin took the picture that would become famous – Photograph 51 – capturing the X-ray diffraction pattern of DNA. This image, along with other data from Franklin’s research, made their way to Watson and Crick, who were also studying DNA at the same time. This data gave them the insight they needed to determine the true double helix structure of DNA. Rosalind Franklin was fully devoted to science, working not only with DNA, but also studying viruses, as a result of which, she brought valuable “lasting benefits to mankind”. 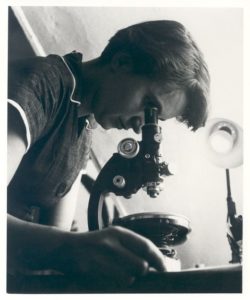