Sir Robert Alexander Watson Watt (1892 – 1973) as an engineering student at the University won the Carnelley Prize for Chemistry and a class medal for Ordinary Natural Philosophy in 1910. During the First World War was assistant in the Engineering Department of the University College, Dundee. He had already studied radio physics and in 1916 he started working at the War Office as a meteorologist. He was interested in using radio to detect thunderstorms and worn the pilots for upcoming thunderstorms. Around 1935 he used the knowledge he had to develop a system of radar waves to locate aircrafts. It was able to locate an aircraft at a distance of 140 km and it operated at frequencies of 22–50 megahertz. The Second World War started and 18 radars were defending England. Before the end of the War the number of radars grew to 53. Watt contributed also to flight safety’s systems with electromagnetic radiation. 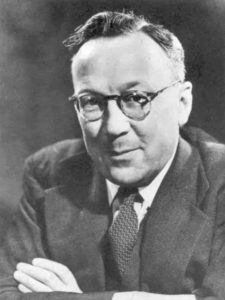