French physicist, a pioneer in crystallography, magnetism, piezoelectricity, and radioactivity. In 1903, he received the Nobel Prize in Physics with his wife, Marie Skłodowska-Curie, and Henri Becquerel.

Born in Paris, France on May 15, 1859, Pierre Curie was a childhood prodigy. He showed an extraordinary aptitude for mathematics and geometry. Curie completed the equivalent of a higher degree when he was only 18, but failed to pursue a doctorate due to some financial problems. He instead accepted a job as a laboratory instructor.

Pierre Curie is widely credited to be one of the founders of modern physics. As a young researcher, his work had already brought important discoveries related to heat waves, crystals, magnetism and symmetry. He formulated the Curie’s law before he married Marie Skłodowska in 1895. They discovered together polonium and radium while conducting research in radioactivity.

Together with Henri Becquerel, the Curies shared the 1903 Nobel Prize in physics for their revolutionary work on radioactivity.

Pierre Curie died in an accident in Paris, France, on April 19, 1906. Curie lost his footing while crossing the street and fell beneath the wheels of a horse-drawn vehicle, suffering a fatal skull fracture. He was 46 years old. 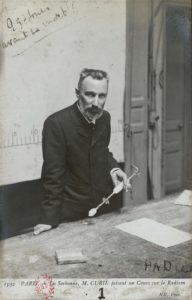