Nikola Tesla (1856-1943) made dozens of breakthroughs in the production, transmission and application of electric power. He invented the first alternating current (AC) motor and developed AC generation and transmission technology. Though he was famous and respected, he was never able to translate his copious inventions into long-term financial success—unlike his early employer and chief rival, Thomas Edison. Tesla studied math and physics at the Technical University of Graz and philosophy at the University of Prague. In 1882, while on a walk, he came up with the idea for a brushless AC motor, making the first sketches of its rotating electromagnets in the sand of the path. Later that year he moved to Paris and got a job repairing direct current (DC) power plants with the Continental Edison Company. Two years later he immigrated to the United States. During the 1890s Mark Twain struck up a friendship with inventor Nikola Tesla. Twain often visited him in his lab, where in 1894 Tesla photographed the great American writer in one of the first pictures ever lit by phosphorescent light. 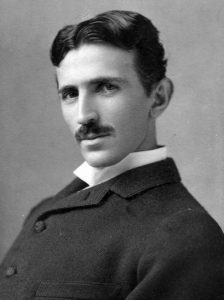