Ancient wrestler from the Magna Graecian (city of Croton), who enjoyed a brilliant wrestling career and won many titles in the most important athletic festivals of ancient Greece.

Milo was a six-time Olympic Champion. He won boy’s wrestling (probably in 540 BC), and thereafter five men’s wrestling titles between 536 and 520 BCE.  Milo’s career at the highest level of competition must have spanned 24 years. To intimidate his opponents, Milo of Croton would consume raw bull’s meat in front of his adversary and would drink raw bull’s blood for energy and vitality. Milo’s hometown had a reputation for producing excellent athletes. In the Olympiad of 576 BC, for example, the first seven finishers in the 200 yards (180 m) sprint were all men of Croton. After Milo’s career, Croton apparently produced no other athletes.

The date of Milo’s death is unknown, but according to some sources, Milo was walking in a forest when he came upon a tree-trunk split with wedges. In what was probably intended as a display of strength, Milo inserted his hands into the cleft to rend the tree. The wedges fell from the cleft, and the tree closed upon his hands, trapping him. Unable to free himself, the wrestler was devoured by wolves. A modern historian has suggested it is more likely that Milo was travelling alone when attacked by wolves. Unable to escape, he was devoured, and his remains found at the foot of a tree. 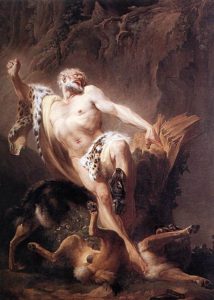