An Abstract Expressionist. He wanted to paint human emotions. Rothko thought that the greatest paintings were the ones that captured a sense of stillness, and that is what he tried to do.

He studied painting at Yale University and then became one of ‘The Ten’, a group of ambitious young artists who wanted to promote abstract art in America. The artist always resisted explaining the meaning of his work. Silence is so accurate,” he said, fearing that words would only paralyze the viewer’s mind and imagination. In 1954 Rothko asked that his largest pictures be installed “so that they must be first encountered at close quarters, so that the first experience is to be within the picture.” Physically ill and suffering from depression, Rothko committed suicide on February 25, 1970, the time, he was widely recognized in the world for his crucial role in the development of nonrepresentational art. During a career that spanned five decades, he created a new and impassioned form of abstract painting. Rothko’s work is characterized by rigorous attention to formal elements such as color, shape, balance, depth, composition, and scale; yet, he refused to consider his paintings solely in these term. In 1957 Rothko was commissioned to make a series of paintings for a very expensive restaurant in New York. The problem was that Rothko didn’t want his paintings to be hung where rich people were eating, but he thought it might be interesting to see if he could make paintings that were so dark and oppressive they would put the diners off their food! He made a series of black and maroon pictures that were very sombre. When they were finished he decided not to give them to the restaurant and gave them to Tate instead. They are called The Segram Murals. 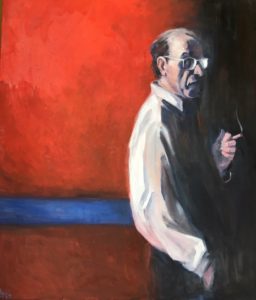