Jeanne Bécu, Comtesse du Barry (19 August 1743 – 8 December 1793) was the courtesan and last official mistress of Louis XV of France and one of the victims of the Reign of Terror during the French Revolution.

Jeanne Bécu was born in France, on 19 August 1743. She was an illegitimate daughter of Anne Bécu and her father was possibly Jean Jacques Gomard. After she finished her education, she worked as a shop assistant at a fashion house in Paris. During this time, she became acquainted with Jean du Barry, a war contractor.

Jeanne Bécu became the mistress of Jean du Barry, and soon he introduced her to Parisian high society. Her beauty attracted and captivated a lot of men. In 1768, she eventually attracted the attention of King Louis XV and a meeting was also arranged between them. Louis XV was already an old man by this time. Jeanne was unable to qualify as an official royal mistress, as it required her to be married to a noble. Therefore, Jean du Barry arranged a nominal marriage between her and Guillaume du Barry, his brother, after which she joined Louis XV’s court. The king was so infatuated by Jeanne, that he ordered a diamond necklace to be made for her that would cost around two million livres.

Also known to be quite fond of the arts, she was a patron to several painters as well as craftsmen.

When the Reign of Terror during the French Revolution took place, Madame du Barry was found guilty of assisting the émigrés who had escaped. She was sentenced to death by the Revolutionary Tribunal of Paris, and was eventually executed with the guillotine on 8th December 1793. Her last words to the executioner are said to have been: «De grâce, monsieur le bourreau, encore un petit moment!» – “One more moment, Mr. Executioner, I beg you!”. 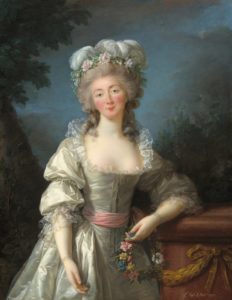