Ludwig van Beethoven (1770 – 1827) is one of the most popular composers of Western music. His work shows the transition from the classical to the romantic era. He was inspired by the idea of humanism and was influenced by the French Revolution. He was a music genius and innovator, exceling the forms of sonata, symphony, concerto, and quartet. At his 20’s he started losing his hearing. During the last 10 years of his life when his deafness deteriorated, he wrote most of his great compositions. In the “Ninth Symphony” he combined for the first time in a symphony both instrumental and vocal music. This Symphony is the most emblematic music work of all times. The “Ode to Joy” is part of that Symphony. It is amazing that by the time he wrote this composition he was completely deaf. Beethoven lived in a period when the court and church patronage declined, but not only he managed to survive this situation, he was the first musician that received salary only to compose music. 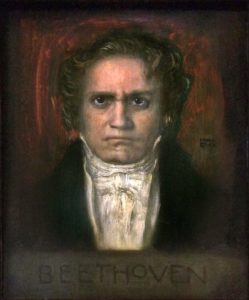