When Louis XV was born on February 15, 1710, no one expected that he would ever reach the throne. He became king at the age of 5 following the death of his great-grandfather, Louis XIV. While Louis had been loved in his youth, earning the nickname “Louis le Bien-Aimé “, he later earned the contempt of his subjects for various reasons. He was abhorred by many due to his stubborn personality and detrimental political actions, including damaging France’s foreign relations and continuously overspending, which exacerbated the country’s financial problems.

Louis XV earned the admiration of the French people during the War of Austrian Succession. He took to the battlefield himself and seemed to take charge of the country’s leadership. Louis XV chose to rule without having a first minister after the Fleury’s death in 1743. The following year, Louis XV fell ill. He recovered, and his relieved constituents gave him the nickname ” le Bien-Aimé ” again. Unfortunately, Louis didn’t retain the affections of his people for long. The War of Austrian Succession proved costly for France. The Treaty of Aix-la-Chapelle, which ended the war in 1748, did little to advance the country or to settle disputes with Britain over certain colonies.

He died on May 10, 1774, in his bedroom at Versailles. He was comforted by his last mistress, Jeanne Bécu, countess du Barry, in his final days. 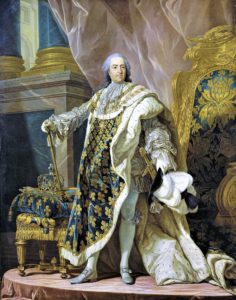