Lisa Meitner was an Austrian-Swedish physicist who was one of those responsible for the discovery of the element protactinium and nuclear fission. She was praised by Einstein as the ‘German Marie Curie’.

Lisa Meitner was born in Vienna, Austria-Hungary in 1878. After finishing her doctoral research in 1905, Lisa became the first woman from the University of Vienna and second in the world to earn a doctorate in physics. She was a physics professor and department head at the Kaiser Wilhelm Institute for years and the first woman to become a full professor of physics in Germany. In 1917-1918 along with Fajans and Gohring, Meitner discovered the element protactinium and assigned its chemical symbol Pa. She was also the only one able to describe its characteristics. During her research with other chemists (Otto Hahn and Fritz Strassman), they were able to isolate three radium isotopes and used fractional crystallization to separate them for their barium carrier. In February 1938, she discovered nuclear fission, a nuclear process that later led to the development of the first atomic bomb and other nuclear weapons and reactors. Despite her large contribution for the discovery of nuclear fission, the Noble Prize was awarded to her male co-workers. Meitner was offered to join Frisch on the British mission to the Manhattan Project but she declined, saying she did not want to have anything to do with a bomb. After moving to Sweden, Meitner worked with Eklund to design and construct Sweden’s first nuclear reactor in 1947 (R1). 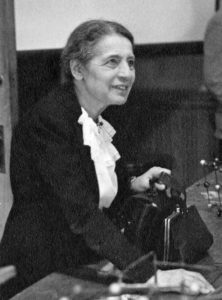