A great Renaissance painter and author of numerous inventions such as the helicopter, Leonardo da Vinci is particularly well known to the general public for several pictorial works including L’Ultima Cena and The Mona Lisa.

Leonardo da Vinci was born in Vinci in 1452. His father noted his talent for drawing and at the age of five placed him as an apprentice in Verrocchio’s studio in Florence. At the age of 20, he joined the painters’ guild and began his career with remarkable works such as The Virgin with a Carnation and The Annunciation. At the same time, he improved the technique of sfumato (impression of mist). In 1481, the monastery of San Donato commissioned him to paint The Adoration of the Magi. Leonardo da Vinci never finished this painting. He left Florence for Milan. After completing The Virgin of the Rocks and the Equestrian Statue of Francesco Sforza, he found fame throughout Italy. In 1495 he was commissioned to paint L’Ultima Cena. In 1498, he produced the Mona Lisa and the Battle of Anghiari. Leonardo da Vinci also undertook a large number of studies on zoology, botany, anatomy and geology. He designed numerous devices and machines, including the first flying machine. These achievements remained at the drawing stage. Many of Leonardo’s sketches, notes and treatises are not original findings, but the result of research carried out in an encyclopaedic spirit, before the time. In 1516, he joined the court of Francis I, where he took part in town planning projects. He died of illness on 2 May 1519. 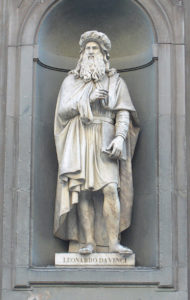