Jules Verne, a 19th century writer, is considered the French father of Science Fiction. He is the author of "Les Voyages Extraordinaires", a collection of 54 books in which the impossible seemed possible at a time of great scientific progress.

Jules Verne was born in Nantes in 1828. After a literary baccalaureate, he studied law in Paris. He then devoted himself to the theatre and thanks to the support of the Dumas family, he became secretary of the Théâtre Lyrique until 1854. He then worked as a stockbroker and met Pierre-Jules Hetzel, a publisher. Jules Verne offered him a manuscript, “Voyage en l’air”, which became “Cinq semaines en ballon” and marked the beginning of a long collaboration. From 1866 onwards and the “Adventures of Captain Hatteras”, his novels were grouped together in an illustrated collection entitled “Voyages extraordinaires dans les mondes connus et inconnues” (Extraordinary journeys in known and unknown worlds), which included 62 novels and 18 short stories. In 1872, “Around the World in 80 Days” was published in serial form and became one of his greatest successes. Jules Verne’s novels are always well researched and generally take place in the second half of the 19th century. They take into account the technologies of the time, such as “Around the World in 80 Days”, but also other unconventional or more fantastic ones, such as “Twenty Thousand Leagues Under the Sea” or “From the Earth to the Moon”. While this series mixes science fiction and adventure novels, the author also tries his hand at other genres such as detective stories (with “Les frères Kip”) or parody (with “Claudius Bombarnac”). In addition to his novels, he has written numerous plays, short stories, poems and songs, autobiographical accounts and artistic, literary and scientific studies. His work has been adapted for the cinema and audiovisual media as well as for comic strips and the theatre. Jules Verne died on 24 March 1905 in Amiens, in his house at 44 boulevard Longueville (now boulevard Jules Verne). 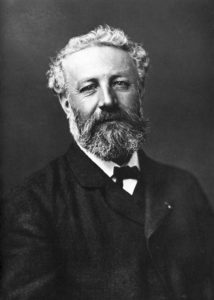