John Herschel was a British scientist and astronomer (1792-1871). He was the inventor of the cyanotype photographic printing technique. He was the son of William Herschel, a German-born musician and astronomer who discovered the planet Uranus.

John Herschel was born in Slough in 1792. He received an excellent education and led a middle-class life. In 1809, he entered the University of St John’s College (Cambridge), where he devoured mathematical works. In 1812, he submitted his first mathematical paper to the Royal Society. In 1813, following five publications on mathematics, he became a fellow of the Royal Society. In 1816, he obtained a master’s degree from Cambridge and left that institution for good. He began his scientific career with a series of lectures at which he assisted his father. His father was anxious to see his work as an astronomer continued. During the first half of the 1820s, he made several trips to Europe. The meeting with several scientists led him to carry out some experiments in physics, geology and meteorology. In 1824 he published a catalogue of 380 double stars. In 1826, he managed six catalogues of 3,346 star systems, nebulae, clusters and double stars, and wrote several scientific articles for encyclopaedias. At the age of 40, he married Margaret Brodie Stewart, with whom he had 12 children. In 1833, Herschel, his wife, three of their children, a nurse and a craftsman left on an astronomical expedition to the Cape of Good Hope. In 1838, he produced a celestial atlas of 3,000 maps in which 68,948 stars were found. In addition to astronomy, he was interested in botany and photography. He was interested in the chemistry of photography and in 1839 he produced the first photograph on a glass plate. The terms “positive” and “negative” are due to him. Sir John Frederick William Herschel died on 11 May 1871. 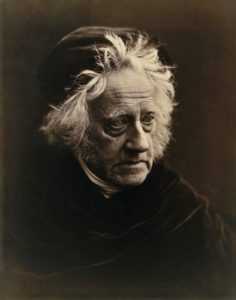