Actress yet an inventor and engineer. Hedy Lamarr was an Austrian American actress during MGM's "Golden Age" who also left her mark on technology. She helped develop an early technique for spread spectrum communications.

Hedy Lamarr was an actress during MGM’s “Golden Age Lamarr was also a scientist, co-inventing an early technique for spread spectrum communications — the key to many wireless communications of our present day. Lamarr was born Hedwig Eva Maria Kiesler on November 9, 1914, in Vienna, Austria. Discovered by an Austrian film director as a teenager, she gained international notice in 1933, with her role in the sexually charged Czech film Ecstasy. After her unhappy marriage ended with Fritz Mandl, a wealthy Austrian munitions manufacturer who sold arms to the Nazis, she fled to the United States and signed a contract with the Metro-Goldwyn-Mayer studio in Hollywood under the name Hedy Lamarr. Upon the release of her first American film, Algiers, co-starring Charles Boyer, Lamarr became an immediate box-office sensation.A recluse later in life, Lamarr died in her Florida home in 2000.

Hedy Lamarr was an inventor by nature, inspired and obsessed to contribute to the sooner end of WW2. She was passionate about inventing and patiently waited for the world to recognize her innovations. “Improving things comes naturally to me.” Hedy Lamarr.

Hedy Lamarr helped invent WiFi and secret radio communication. However, her Patent on technology was confiscated. 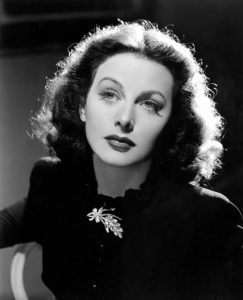