German photojournalist known in particular for her reports on the Spanish War.

Gerda Taro (real name Gerta Pohorylle) was born in Stuttgart in 1910. Her parents were Jewish merchants. She received a good education and spoke German, English and French. She moved to Leipzig in 1930. She quickly became involved in the revolutionary movements of the time and was even imprisoned for communist activities. When Hitler came to power, Gerda left Germany for France. She survives by working as a secretary and spends her free time in the cafés of Montparnasse. She met the photographer André Friedmann. She had a love affair with him. She invented the character of the “American photographer” and gave him the pseudonym Robert Capa. She chose Gerda Taro for herself. In 1935, she was hired as an assistant at the Alliance-Photo agency. She received her first press card in 1936, issued by a photo agency in Amsterdam. At the beginning of the Spanish Civil War, she followed the fighting of the International Brigades alongside the Republican fighters as a war photographer. In 1937, during heavy fighting in Madrid, she was run over by a Republican tank near Brunette and died the next day at the age of 27. She was the first woman press photographer to be killed in the line of duty. In 2007, a suitcase found in Mexico City contained negatives of photographs by Gerda Taro, Robert Capa and David Seymour. Following this discovery, Gerda Taro’s work has been reconsidered in a new light. Not only because of the scope and importance of her work, but also because some of the photographs attributed to Capa were in fact the work of Taro. 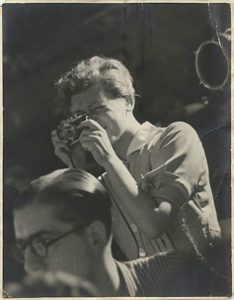