Portuguese explorer who achieved the first circumnavigation of the Earth.

Ferdinand Magellan (1480 – 1521) was a Portuguese explorer. He is the first who managed to cross the Pacific Ocean during the Spanish expedition to East Indies. Magellan planned and led this expedition. In 1517 he persistently asked permission to lead an expedition to reach the spice islands from the East. The Portuguese King denied the demands, so Magellan turned to Spain for support. Spain was interested in the expedition and King Charles I of Spain accepted it. He also gave five ships, power and privileges to Magellan. He became the second Portuguese explorer after Columbus, that was not used by their home country to explore the seas. Ferdinand Magellan converted the locals to Christianity. Most regions accepted the new religion but not the Mactan island near the Philippines. In an attempt to subdue the natives by force, Magellan was murdered by the Lapulapu troops. Only one ship managed to return in Spain after the expedition in 1522. 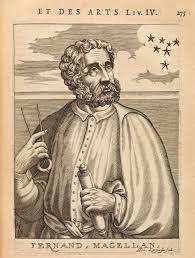