Creative Mathematics Genius, as she is often addressed now, Emmy Noether is one of the most inspirational female role models in the history of science.

Emmy Noether is one of the most inspirational female role models in the history of science. The Noether’s Theorem, also labelled as the most beautiful idea in physics – is symmetries applied to conservation laws, or a relationship between symmetries in physics and conservation principles. Although it sounds too complicated for a non-mathematician and/or a non-physicist, Noether’s Theorem is explicable and understandable enough for school students who study physics. This basic result in the theory of relativity was praised by Einstein in a letter to Hilbert when he referred to Noether’s penetrating mathematical thinking. But it is not only for the theorem that Emmy Noether is famous. She constantly struggled her entire life for a place in Mathematics, where there was hardly any space for a woman at that time.

Some biographies inaccurately portray Noether as a somewhat helpless genius at the mercy of men’s charitable actions. In reality, she had an assertive personality, and was eventually recognized as a leader, and as the first female plenary speaker at the renowned International Congress of Mathematicians (Celebrate the mathematics of Emmy Noether) 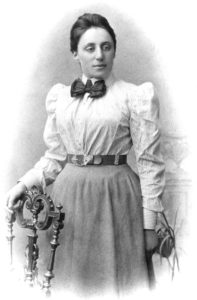