British Biological Chemist. She has received a Nobel prize in chemistry.

Dorothy Hodgkin, born Dorothy Mary Crowfoot Hodgkin, was born in 1910 in Egypt. Hodgkin developed a passion for chemistry from a young age and she studied it at University of Oxford in 1928. She graduated with distinction in 1932, becoming the third woman at the institution to achieve this. Whilst completing her PhD, she became aware of the potential of X-ray crystallography to determine protein structures. Through her years-work of research, she discovered the three-dimensional biomolecular structures. She also solved the structure of penicillin and first encountered vitamin B12, and created new crystals. One of her greatest accomplishments was discovering the structure of insulin using X-ray crystallography and computing techniques. Hodgkin also took part in the meetings in 1946 which led to the foundation of the International Union of Crystallography. Her work on the structure of biomolecules became an essential tool in structural biology. 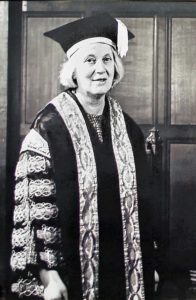