Carl Djerassi (October 29, 1923 – January 30, 2015) was an Austrian-born Bulgarian-American chemist, novelist, playwright and co-founder of Djerassi Resident Artists Program with Diane Wood Middlebrook. He is best known for his contribution to the development of oral contraceptive pills, nicknamed the father of the pill.

Carl Djerassi was born in Vienna, Austria, but spent the first years of his infancy in Sofia, Bulgaria, the home of his father, Samuel Djerassi, a dermatologist and specialist in sexually transmitted diseases. Djerassi started his college career at Newark Junior College, briefly attended Tarkio College, and then studied chemistry at Kenyon College, where he graduated summa cum laude. After one year at CIBA, he moved to the University of Wisconsin–Madison where he earned his Ph.D. in organic chemistry in 1945. His thesis work examined the transformation of the male sex hormone testosterone into the female sex hormone estradiol, through a sequence of chemical reactions. Djerassi participated in the invention in 1951, together with Mexican Luis E. Miramontes and Hungarian-Mexican George Rosenkranz, of the progestin norethisterone—which, unlike progesterone, remained effective when taken orally and was far stronger than the naturally occurring hormone. His preparation was first administered as an oral contraceptive to animals by Gregory Goodwin Pincus and Min Chueh Chang and to women by John Rock. 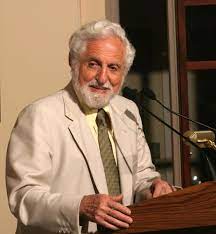