Sir Arthur Ignatius Conan Doyle (1859 – 1930) studied medicine at the University of Edinburgh Medical School. During his studies he started writing stories. After completing his Bachelor and Master’s degree of medicine he completed his Doctor of medicine degree with a dissertation on tabes dorsalis in 1885. As he struggled to find patients, he returned to his writing career. Sherlock Holmes was inspired by a professor of Doyle’s named Joe Bell. He wrote more than 50 stories about Sherlock Holmes but that was not the only character he created. His work includes science fiction and fantasy stories, romance, poetry and historical novels. He was an advocative of justice. He personally investigated two closed cases in which both of the accused were exonerated of the crimes of which they were accused. In the first one about a lawyer who had allegedly penned threatening letters and mutilated animals, Doyle’s involvement helped to establish in 1907 the Court of Criminal Appeal to prevent other Justice miscarriages. 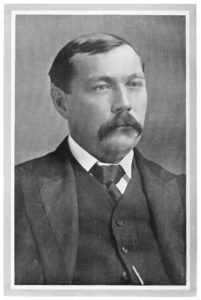