She is the director of the new Superconducting Quantum Materials and Systems Center based at Fermilab, where she works on building the most powerful quantum computer ever!

Brilliant and tireless researcher Anna Grassellino was born in Sicily, Italy, about 40 years ago, studied electronic engineering and earned a PhD in Physics from the University of Pennsylvania. In 2020, the US Department of Energy appointed her Director of one of its 5 Quantum Centers, the SQMS DOE National Quantum Information Science Research Center, and commissioned her to design and build the most powerful next-generation quantum computer ever, with an investment that it is around 115 million dollars. This activity is carried out at the Fermilab, the American laboratory of particle physics and accelerator, located in Illinois. Scientists and researchers work there who study to solve the mysteries of matter, energy, space and time. This will be the most powerful quantum computer that ever existed! It will allow much faster calculations in particular applications, such as cryptography (and therefore in national security), pharmacology and medicine to simulate the behavior and interaction between molecules (with important impacts, for example in the design of new vaccines). The team coordinated by Anna applies this computer in the field of physics, to better study and understand the world around us, particles. Indeed, Anna’s specialization is the study of radiofrequency superconducting cavities, known as SRF, which represent the heart of modern particle accelerators.

Among the award she received, certainly to be remembered, the Presidential Early Career Award for Scientists and Engineers, the highest recognition that the United States government offers to young and promising professionals in the scientific research sector which in 2017 was awarded to her by President Barak Obama. 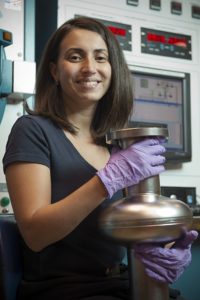