Sir Alexander Fleming (1881 – 1955) attended Louden Moor School, Darvel School, and with two-year scholarship the Kilmarnock Academy. Later, he moved to London where he attended the Polytechnic. In 1903 he entered St. Mary’s Medical School, London University. He contributed to the field of antiseptics with his research during the World War I. At St Mary’s Hospital he continued his research into bacteria and antibacterial substances. At that time, he discovered the enzyme lysozyme. In 1928 he discovered the first broadly effective antibiotic obtained from Penicillium moulds known as penicillin. This discovery is considered to be the first ‘’victory over disease’’. He received the Nobel Prize in Physiology or Medicine in 1945 along with Howard Florey and Ernst Boris Chain. Fleming was known to his fellow researchers for his untidiness in the laboratory. It is believed though that it was his untidiness that allowed him these discoveries. 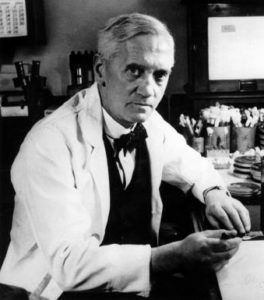