German-born theoretical physicist, widely acknowledged to be one of the greatest physicists of all time. Einstein is known for developing the theory of relativity, but he also made important contributions to the development of the theory of quantum mechanics.

Albert Einstein was a German physicist of the XIX and XX centuries. He was born on March 14, 1879 and died on April 18, 1955. Einstein was known mainly for the development of the theory of relativity (special and general), the theoretical explanation of the Brownian motion and the photoelectric effect.

Einstein was born in the German city of Ulm, but one year later his family moved to Munich, where he would live until he was 15 years old. At 17, he entered the Federal Polytechnic School of Zurich to study mathematics and physics. Five years later, when he was a graduate, he obtained Swiss citizenship and in 1902 he began to work in the Federal Office of Intellectual Property in Switzerland. He worked this job until his 30s and was able to combine is with his scientific research.

In 1905 he published four scientific articles on the photoelectric effect, the Brownian motion, the theory of special relativity and the mass-energy equivalence (E = mc²). The first earned him the Nobel Prize in Physics in 1921, the second the degree of doctor and the last two, over time, would make him the greatest scientist of the twentieth century.

In 1908 he began to practice as a professor of physics at the University of Bern, a position he would continue later in Prague and finally in Berlin. He lived there until the rise of the Nazi regime made him leave Germany and move to the United States (1932). There he taught at the Institute of Advanced Studies in Princeton and became an American citizen (obtaining dual Swiss-American citizenship). He spent the rest of his life trying to integrate the physical laws of gravity and electromagnetism. He also spread pacifist, socialist and Zionist values. He died as a result of an internal hemorrhage on April 18, 1955 (76 years old). 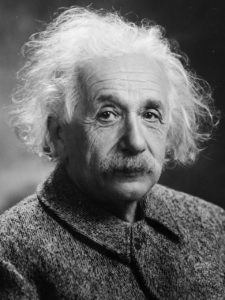