Lived 1815 – 1852. Born two centuries ago, Ada Lovelace was a pioneer of computing science. She took part in writing the first published program and was a computing visionary, recognizing for the first time that computers could do much more than just calculations.

Enchantress of Numbers, Ada Lovelace was a very intelligent and well-educated lady from high society. Being a daughter of the famous poet Lord Byron, whom she never knew, and having been raised by a very progressive mother for those times, Ada for her short yet bright life was regretfully weak in health but made an outstanding progress in science, mathematics in particular. This was a brave act for a beautiful, yet fragile young girl. Even after a marriage and birth of three children she continued her investment into mathematics. Her lifelong friend and the so-called father of computer, Babbage, was her mentor and scientific project manager in modern interpretation. They co-worked on the creation of an analytical machine, that when given programmes, could do anything from calculating to composing music, which sounds like creating a modern computer. 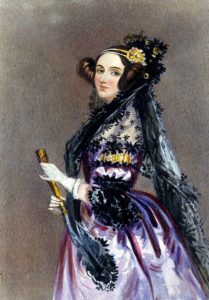